"To speak of rocks is often to speak of the usual meanings of steadfastness, impenetrability and rigidity. But a rock, despite its veneer of intractability' testifies to mutability and motion.

Underneath our feet, the great plates groan and shift, melt and metamorphose. What the earth heaves out of its core is a mere outcrop of the tremendous activity that has been taking place for millions of years and will continue to take place for millions more, independent of man. That simple streak of vermilion we see on the surface may be a story of volcanic beginnings. Thus, at the heart of it, to speak of rocks in to speak of history.

The spare photographs of these emblems of the earth invite us to meditate on our own existence- how we in turn shaped our own histories alongside the massive mysticism of rock and stone. To mediate on these rocks is to meditate on the impulse of creation. Out of these rocks- no matter from which part of the world- we build homes and cities, we make altars and artworks. Everywhere the earth speaks a common language. In these photographs are reminders of man's dreams.; his fierce consciousness in wondrous communion with creation. "-- Allan Popa and Mabi David 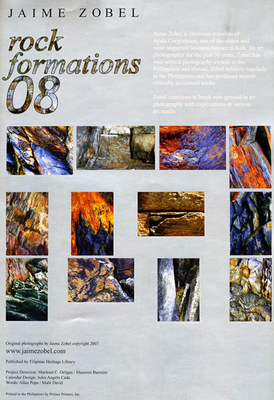