"Colors of the Earth.

There is something profoundly striking at the sight of a flowering shrub sprouting out of a crevice of a rock. Contrasting manifestations of the two faces of nature,one one hand, fragile and fleeting, and on the other, impervious and strong, these, nonetheless, speak of the enduring balance holding all of creation together.

With Colors of the Earth, Jaime Zobel sheds a new perspective through his keen reinterpretations of what has been a popular artistic subject matter: nature. He focuses on three elements, flowers, leaves, and rocks, and utilizes these to create images which are at once graceful and forceful. It is these two qualities, dual elements that lie at the opposite ends of the spectrum, which ultimately are given being by the transient, frail laves and flowers, and the infinite, imperturbable rocks. Furthermore, it is the interplay and final cohesion of these contrasting characteristics that is at the heart of his work: for it is a truth that opposing forces can be joined harmoniously as one, with each still retaining its distinctions, while complementing one another.

Zobel, a photographer by avocation, once professed in one of his books to have been deeply moved by the varied forms of nature ever since he was a child. This passion is now evinced by his numerous works such as Flowers, Homage, Spectrum of a Flower, and Seasons of the Mind." In Colors of the Earth, he juxtaposes his photographs of flowers and leaves, and different rock surfaces against each other.

Collaborating with Zobel is Fracisco (Dopy) Doplon, a multi-awarded art director and graphic artist who has already joined Zobel in a number of his works. Owing perhaps to the intuitive creative understanding that has evolved with their frequent collaborations, Doplon unerringly realizes Zobel's visions through evocative compositions infused with his insightful and elegant touch.

Colors of the Earth, thus, in its entirety, pays tribute to the inherent harmony weaving the disparate elements of nature into a balance whole. At the same time, it speaks of the communion between two artistic souls who have forged and created a vision together. " 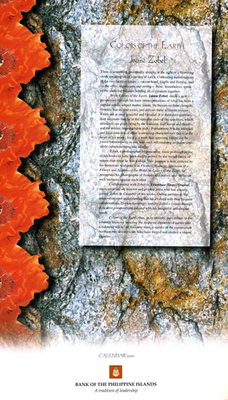